Today we celebrate one year with our Peter Miles.  I feel like I am on a merry-go-round and I keep trying to grab onto things that are stationary, but life just keeps spinning.  Time is flying, but here we are with another one-year-old.  Here we are, blessed again. 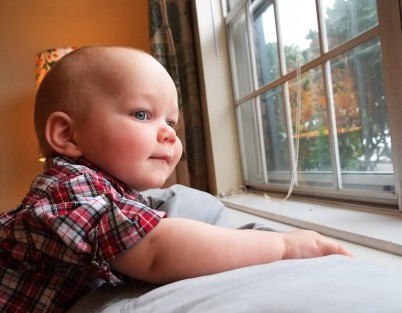 Whenever I look at this chubby little guy, I remember seeing his tiny beating heart on the ultrasound screen for the first time.  The technician was very quiet during the exam.  She told me there was a problem and my doctor would explain when I saw her.  My doctor showed me the pictures of the ultrasound, and the large portion of the placenta that didn’t seem to be functioning.  She told me that she expected this pregnancy to end in miscarriage.

Days and weeks passed by.  Daily I offered up this little life to the Lord, slowly learning to open my hands and let go of what I wanted.

At my twelve week appointment, we heard another strong heartbeat.  My doctor was surprised to see me and to see my son so strong.  She sent me to  a specialist in another part of the city, who talked to me about my high risk for a repeat placenta abruption, about accreta, about preemie baby care and at what gestational age he would be able to survive.  On the ultrasound we saw a strong, healthy boy, squirming and growing and heart pumping.  She said I must have many praying for him, because his situation almost always prevented healthy growth in utero.

Each week brought more peace as each week meant my son was a little bit stronger, and we made it all the way to 38 weeks before labor started.  Peter Miles Taylor was born at 9:00 pm on a warm October Tuesday, weighing in at 7 lbs 11 oz.  My biggest baby, and my earliest.  We named him Peter after my father, Taylor after Jon’s grandfather (who entered the presence of the Father just this week) and Miles because he has been a strong soldier and fighter since his first heartbeat.

Miles has been such a wonderful addition to our family.  He gives the tightest hugs and eats more than I do.  He weighs as much as his three-year-old sister.  He is strong and doesn’t give smiles easily.  There were so many months last year when I did not know if he would be healthy, when I would get into my car after every appointment and whisper “this life belongs to You, Lord, sustain me to do Your will without fear.”  Every time I hold my son I remember that it is it Lord who formed this strong young boy despite all the dangerous appearances, and I am thankful every moment.